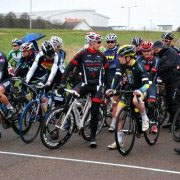 Three sets of organisers and the managements of three London state of the art cycle circuits have uniquely linked up to promote the Condor Cycles London 3-day race for 2/3 categories on 3/4/5 May. The venues are the new Lee Valley VeloPark, the Kent CycloPark and Hillingdon traffic free closed circuits.

In an example of how three different regions can work together for the broad based good of cyclesport, East London Velo at VeloPark headed by Jack Steven have now joined the organising team already composed of the SERR League and BC West Thames Promotions.

Co-ordinated by Stuart Benstead of Hillingdon, the SERR League headed by Kim Anderson is providing a core of the organisation by providing their transponder system and their Luke Anderson is to be chief Judge. He and Richard Hemsley of SE Region have drawn up specific rules to cover this unusual event, while Aidan Hegarty, of Central Region, with be the chief commissaire applying them.

Benstead and Jez Cox of VeloPark conceived the original idea and state: “We have observed in recent years the huge growth in closed circuit racing which in numbers is now bigger than open road racing. The increase in BC membership, including race licences, is bringing into the sport newcomers who welcome the opportunity of high speed racing in traffic free conditions. This ideally complements open road racing by providing safe bunched racing experience as a stepping-stone.

“More and more circuits are opening around the country and the Condor Cycles London 3-day will provide an example of how others can link up and provide a wider experience of different terrain and challenges.”

The event is aimed at the sport’s core 2nd and 3rd cat riders and entries are already nearing the budgeted number, being on a first come basis, no doubt attracted by the prize list of over £1,100 and the promised high quality of organisation.

Entries are via the British Cycling On-Line system and close on 20 April.