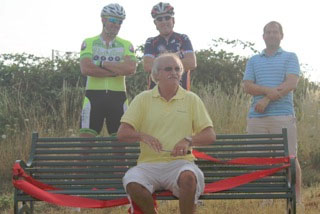 A gathering of a hundred riders, officials, friends and admirers of the late Chas Messenger gathered at Hillingdon Circuit for his son, also Chas, to cut the ribbon on a memorial bench opposite the finishing line. The inscription on the bench reads:

Chas Messenger was famed for many things, including organising the Milk Race Tour of Britain and managing the GB team when Beryl Burton and Graham Webb both won world road championships on the same day. That has never been repeated. In London however, his most important legacy is his 10 year search, haggling with councils, and eventual success in obtaining the Hillingdon circuit that now operates with events on seven days a week and providing safe traffic free cycling for thousands of riders.
In fact it also caters for any non-motorised sport such as the London Nordic Ski Club which was one of the many organisations, clubs and individuals who contributed over £1,000 to purchase and install the bench. Four members of the Pickwick Bicycle Club attended the ceremony, two wearing the regulation straw boater and two who will be fined for being improperly dressed! Left to right: Sean Bannister, a member of Chas’s Chequers Road Club and a coach of Bradley Wiggins in his junior years; Chas Messenger Jnr; Stuart Benstead, chairman of the circuit managing Users Group; and Ray Kelly, a regular official for Chas’s events and a founder of the circuit’s Slipstreamers children’s club. Chas Messenger Jnr sits on the bench, behind which is Tony Gibb, who started his career as a youth rider in Messenger events on the adjacent Hayes by-pass (along with Bradley Wiggins at the same time) which led to the present circuit.
With Tony is Bill Butterworth, who rode many Messenger organised events. He is still racing and is also now multiple organizer of BC Masters and, separate, women’s races. Both were competing in the race that followed the ceremony.
Colin Mann, right, is a regular official at the circuit and raced and officiated at Messenger promotions.